Blinds and Shutters: Icons of the Sixties Limited Edition Book 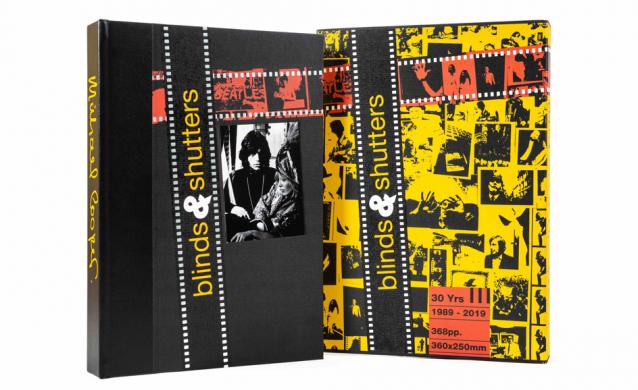 With over 600 photographs and a 30,000-word text from 93 legendary contributors, Blinds & Shutters is not only a unique insider’s view of the Sixties through the lens of photographer Michael Cooper, it is the defining record of an era, as told by those who were at its centre. From musicians such as Keith Richards, Eric Clapton and George Harrison, to artists and writers Andy Warhol, David Hockney, William Burroughs and Allen Ginsberg,the list of contributors is nothing short of awe-inspiring.

To celebrate 45 years of Genesis Publications and 30 years since the milestone publication of this their most sought-after limited edition, the final 600 copies from the edition of 5000 copies have now been hand bound in Italy.

These copies are presented in a special anniversary binding, quarter bound in leather with foil blocking and silkscreened page edging. An individually placed photograph is inset into the book's front cover and varies from copy to copy so no two books are the same. A hand-made slipcase houses each book. The publication's large format (360mm x 250mm) provides the perfect medium for Michael Cooper's work, which is printed on a fine quality, heavy (170 gsm) paper made especially for the book. It is nothing short of a magnificent production and everyone who views it totally understands that it is a true work of art.

The Sixties was a prolific period of artistic cross-fertilization. For the first time in Britain the class barriers were really down; everyone seemed to know everyone. Through his association with London's influential art dealer Robert Fraser, the Rolling Stones and The Beatles, Michael Cooper met the artists, writers, poets and musicians of the time as well as the courtiers surrounding them. Many of those who brilliantly lit up the decade on both sides of the Atlantic were photographed by him. He lived the life of his subjects and they trusted him, revealing themselves to him in all their power and their humanity.

The informality and intimacy of these portraits make these pictures incredibly candid, often funny and sometimes sad. Most of Michael's photos are a reportage of what he and his famous friends happened to be doing that day, but there are also the famous commissioned photographs: the Sgt. Pepper's album cover was set up in his studio and he travelled to New York with the Stones to mastermind the Satanic Majesties' Request album cover. Remarkable out-takes from these two sessions are published in Blinds & Shutters.

'It's difficult to separate The Beatles from the fashion or the culture. It was all happening at once, as a kind of whirlpool.' - PAUL McCARTNEY

'Michael had that perfect ability to take all those pictures without annoying anybody. It would be accepted by whoever was around - people wouldn't know they were having their picture taken.' - KEITH RICHARDS

Keith Richards, in his foreword to this book, recalls of Michael: 'I remember a camera protruding from his chest as if he was some mutant, and he wore pink woolly socks'.

Michael Cooper died tragically in 1973. During the last stages of his life he conceived the idea for this book and expressed a wish that it should be published with a little help from his friends. In an astonishing response, 93 contributors (including three Beatles, and all the Stones) banded together to provide the book's text.

50,000 autographs were given during the making of BLINDS & SHUTTERS in 1989. Each copy is signed personally by at least nine of the contributors in varying amounts so no two books are the same.

The free CSS minimizer will compress the style files for your websites in seconds and it does not require download and installation.