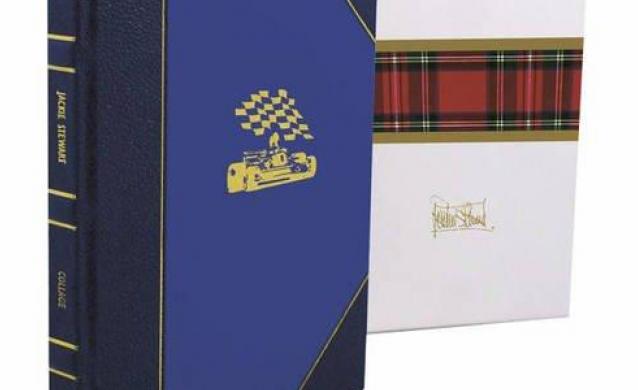 Collage is Sir Jackie Stewart’s account of an incredible racing career, as told through the unseen archive of the Stewart family albums. Originally compiled by Sir Jackie’s wife, Lady Helen Stewart, the albums began in the early sixties with a few press cuttings donated by Lady Helen’s mother-in-law. They grew into 17 volumes. A careful collation of those original albums, Collage has been assembled under the personal guidance of Sir Jackie alongside his own in-depth commentary.

This fascinating array of photographs, press cuttings, pit passes and other memorabilia tells the story of a truly remarkable sportsman and opens a window onto the halcyon days of Formula One.

Specifications
Printed by the finest printers in Europe using the latest oxidising inks on premium, heavyweight, uncoated art paper – then hand-crafted by artisan bookbinders in Scotland - each book features gilded page edges and hand-tooled decorative work blocked in gold leaf. The robust leather half-binding is presented in a hand-crafted slipcase inspired by Sir Jackie’s crash helmet. The case is finished with silk-laminated paper, gilt-foiling and a Royal Stewart tartan band. A limited edition of 1500 copies.