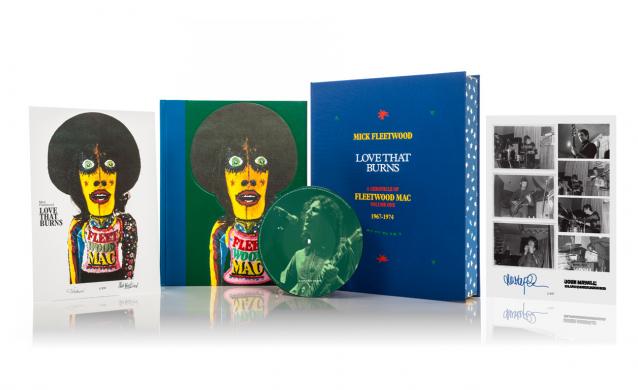 In 1967 Fleetwood Mac debuted at the Windsor Blues and Jazz Festival. Fifty years later, Mick Fleetwood documents the rocky beginnings of a band that emerged from what is now referred to as the British Blues Boom.

Love That Burns contains original manuscript from Mick Fleetwood recounting his childhood, early bands, Fleetwood Mac's debut performance, first international tours, live gig antics, playing with Blues Legends at Chess Studios, and his friendship with the legendary Peter Green and the many talented members that formed Fleetwood Mac in the years before 1975.

The first print is by one of the most important graphic artists of the Sixties, Gunther Kieser, whose creative credits include artworks produced for Hendrix, Dylan and Led Zepplin. Kieser's doll image - used in the promotion of a Fleetwood Mac tour appearance in Munich, 1970 - is included as a numbered print, co-signed by the artist Gunther Kieser and author Mick Fleetwood

The second print reproduces a collection of rare photographs from the collection of John Mayall. They show the Bluebreakers in action during 1967, with Peter Green on guitar, John McVie on Bass and Mick Fleetwood on drums. The Bluesbreakers print is numbered and signed by John Mayall.