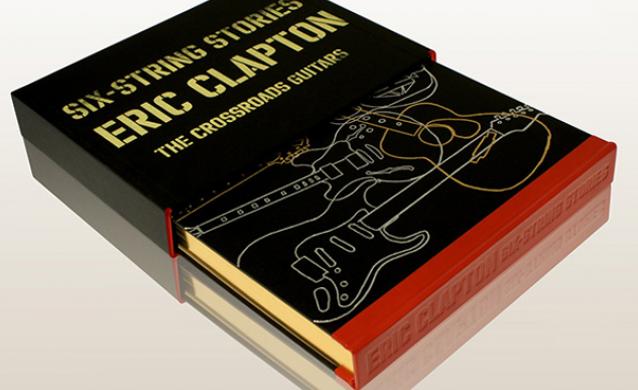 Beginning with his blues roots and early days, Clapton's signed limited edition documents his entire career through the tools of his trade: his guitars. Six-String Stories is told through Clapton's own words, with background information for each instrument and archival photography spanning five decades.

Nearly 300 pieces from Clapton's collection, sold across three Crossroads auctions, are brought together here for the very first time. Six-String Stories presents a 'family tree', making connections between Clapton's instruments and amps, and placing them in the chronology of his career.

Every piece has been photographed, showing the beauty of the design and the wear and tear often caused by years on the road. The instruments are also shown in play, with performance shots of Clapton taken by over 80 of the world's best photographers, including David Bailey, Terry O'Neill, Dominique Tarlé and Lord Snowdon. See Clapton's evolution from the psychedelic sixties, through the stripped-back seventies, electric eighties and unplugged nineties, right up to the 2011 Crossroads auction.

Eric recalls the instruments he bought to emulate his heroes, the guitars with unknown origins that became their own legend, the ones that never left his side, and the legacy they left behind.

You can see and hear the guitars in use, with playlists and concert dates accompanying the instruments used on records and at public appearances. Our 50-year documentation of Clapton's performance history, included within the book, allows you to further reference the guitars against Clapton's life's work.

Historical and technical information is provided for every piece of Clapton's vast collection to complete the story behind each guitar.

The hand-crafted binding is inspired by the book's content. The collector copies are quarter bound in cherry red leather to match Clapton's famous Gibson ES-335. The silhouettes of some of his most iconic guitars are blocked in gold and silver foils onto the cover. The book's 376 pages are also edged in gold.

A buckram-covered slipcase with leather accents houses the limited edition. The title is silk-screened onto the front in the style of the Cream and Derek and The Dominos stencils that brand Clapton's early guitar cases.

"These guitars have been really good tools; they're not just museum pieces. They all have a soul and they all come alive." - Eric Clapton